The Boardwalk Bowl recently unveiled a new display chronicling the history of bowling at Santa Cruz Beach. Jessie Durant, our archivist, dug through Seaside Company files to search out the information and artifacts. It’s the latest attempt to use our archives to highlight our company’s century-long recreational legacy.

As I recently studied the finished exhibit, I stumbled on a little-known, fascinating factoid about our beach bowling spot. In February 2001, after singing at two sold-out performances in Santa Clara, the 26-member troupe of the Vienna Boys Choir dropped in unexpectedly at the Surf Bowl while on their way to their next concert in Los Angeles. Bowling was something the choir enjoyed when on tour. There in the display sits the bowling pin they signed to commemorate their visit. Many other interesting facts and artifacts are revealed in the exhibit.

It reveals the start of beach bowling was a 4-lane “duckpin” alley in a Boardwalk building in 1909. It sat adjacent to the Scenic Railway, where the Haunted Castle ride entrance is today. Duckpin bowling has rules similar to ten-pin bowling but uses smaller pins and balls. Victor A. Marini managed the alley in 1910, which is the earliest recorded activity of the Marini family on the Boardwalk. Over the years, the bowling operation changed hands several times.

By 1932, bowling was removed and replaced by several concessions. The lion’s share of that space, however, became the Boardwalk’s first dark ride. “Dante’s Inferno” inaugurated a nearly nine-decades long series of re-themed dark rides at that location, culminating with today’s expansive “Haunted Castle” ride.

Duckpin alleys re-appeared in a section of the Casino building in the first half of the 1940s. A newspaper article from October 3, 1943, mentioned them being used by sailors during World War II while convalescing at the Casa Del Rey Hotel. The US Navy leased the hotel as a wartime respite for injured seamen. It sat across the street from the Casino at the corner of Cliff and Beach Streets. The 1989 Loma Prieta earthquake that leveled downtown Santa Cruz also undermined the Casa Del Rey’s structure and caused its demise as well.

Bowling enjoyed a significant resurgence in 1958. A group of local businessmen opened a 14-lane alley, lounge, and restaurant on Cliff Street. The new Surf Bowl emerged from space that was formerly home to the Casa Del Rey Market and Garage. This modern, new center was more extensively appointed than older, established bowling locations in our county at the time. The latest state-of-the-art Brunswick automatic pinsetters and underground ball returns immediately attracted eager league and recreational players alike. The business grew, and two years later, the center expanded to 26-lanes.

The building is full of my own memories. As a novice bowler, I honed my skills at the Surf Bowl. I eventually managed to keep a ball out of the gutter and knock a pin or two over, even making spares and a few strikes. I learned how to manually score a game before automatic scorers took over that task. After concluding a Boardwalk night shift during my later teen years in the 1960s, I’d often join other employees at the Bowl. The facility welcomed our late-night bowling jam fest and noisy camaraderie. We would often close the place down in the very early morning hours.

Several exchanges of ownership ensued until 1974 when the Tosello family, operators of Cabrillo Lanes in Watsonville, purchased the property. George Tosello, along with his son Carey, actively managed the Surf Bowl and further updated it with the latest in bowling equipment and technology.  The restaurant struggled, however. My family’s business, Whiting’s Foods, took a turn operating it as “Café Santa Cruz” for a few years in the 1980s without overwhelming success. The eatery sufficiently supported the needs of bowlers, its primary purpose, but never enjoyed sufficient popularity with beach visitors.

Then in October 1994, George Tosello sold “the Bowl” to the Seaside Company. As the digital age blossomed in the 1990s, the company acquired experienced bowling management and aggressively took further steps to widen the location’s entertainment appeal. New scorer units were added, along with some peripheral and cosmetic facility improvements. In 1996, our technical staff incorporated the “Atomic Bowling” phenomenon using blacklights, music, and a light show that energized a hip new bowling experience. Consult boardwalkbowl.com to see the ways technology has enlivened the bowling atmosphere over the past two-plus decades.

In the company’s early years of operation, our marketing staff worked hard to introduce bowling to Boardwalk-bound guests. However, coming to the beach and bowling escaped the fancy of most Boardwalk visitors, even though the center sat just across Beach Street from the Casino Arcade.

Like everything else, bowling was responding to changing times as the new millennium dawned on the horizon. The Surf Bowl’s management staff observed new practices being adopted by successful proprietors and bowling industry leaders. To successfully keep pace with new trends in the bowling world, in 2001, the Seaside Company completely revamped the center’s hodge-podge of old inter-connected buildings and renovated all aspects of the facility – inside and outside – everything, short of demolishing the structures. A strikingly new bowling center was re-introduced later that year as the “Boardwalk Bowl,” as strong a link with the Boardwalk that a name can imply.

Several concession spaces formerly leased to beach-serving tenants the Kite Shop and Pizza Amore had to go to make way for the enlarged Coaster’s Bar & Grill. The old cocktail lounge space became a small arcade. A new party room occupied the former restaurant location, and the pro-shop was expanded. New synthetic lanes and the latest pin-setting and ball return mechanisms were added along with improved approaches and comfortable seating for players. An outdoor dining patio connected the bowl directly with Beach Street.  Initial plans even called for a second-level housing component intended to be attractive to students, but that phase of the project was curtailed. 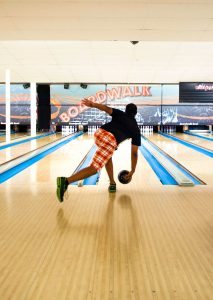 Ever since, the Boardwalk Bowl has been rolling up pin-splitting memories with its state-of-the-art bowling equipment, arcade, restaurant, and lounge. Bowling has become a very family-friendly activity. Young kids can set a special 6-pound ball in motion, and retractable lane guards guarantee that a slow, wandering ball will topple pins. The Bowl’s appointments satisfy the most avid, competitive bowlers, too. In addition to serving great food and beverages, Coaster’s Bar & Grill hosts live weekly bands. The Santa Cruz Good Times hailed the lounge as offering the Best Karaoke in Santa Cruz County for 2019. Named stars like James Durbin and Jason Aldean have graced the lounge’s stage.

Check out the Boardwalk Bowl during your next visit to the Boardwalk. It’s just across Beach Street from the Casino Arcade. Linger over the historical exhibit around the pro-shop and learn the fascinating story of bowling at Santa Cruz Beach and the people who have made it all happen for over a century. The center’s engaging staff will help you strike up new memories for yourself, family, and friends!

PrevBoardwalk’s Scenic Railway, Not So Scenic After All
Munching Along the Boardwalk 60 Years AgoNext