The Boardwalk’s 1911 Looff Carousel is the soul and spirit of our seaside amusement park. It occupies a special niche all its own among Boardwalk buildings. As our oldest ride, four or five generations of the same family may have ridden this operating antique during its nearly eleven decades with us. You’ll find out more about its history HERE. The National Park Service declared the ride a National Historic Landmark in 1987, a most distinguished honor.

Famed carousel designer Charles I. D. Looff fabricated the ride in his Rhode Island workshop and shipped it to Santa Cruz.  He built the carousel building (called a hippodrome back then) to house it and the ride officially opened in August 1911. The original building incorporated two, second-story apartments for operators signaling concessionaire Looff’s intention to open the ride year-round. We don’t know the details surrounding the transaction, but the Seaside Company procured the ride from Looff in 1917 and has been running it ever since.

Tired and worn after 50-plus years, the carousel’s original wooden building was replaced by today’s structure in 1966 – 1967.  The building’s unusual domed roof is supported by an exterior steel-lattice frame.  It was an innovative style for that era. There’s also a full basement under the ride. Amusement attraction designer Ken Forsse fabricated the three sea horses atop the roof’s center point well before he created the famous Teddy Ruxpin toy and a related, animated television series.

Over the decades, both hippodrome buildings extended 12-feet onto railroad company property for which the Seaside Company paid an annual rent to Southern Pacific railway until finally purchasing the right-of-way in 1993.

One distinguishing feature of our ride is its ring machine. Only a handful of carousels still incorporate one of these. Rings were added to lure adults onto the ride. Each year, Boardwalk staff ungrudgingly replaces thousands of rings that become ready-made souvenirs for riders who abscond with them beneath signs stating, “Do Not Remove Rings from Building.” So significant is this ring apparatus, if it is not operating for any extended time, Boardwalk visitors register their immediate displeasure by not riding. It’s what adds a thrill to our ride and is an essential element of our carousel experience.

Before 1950, a “ring boy” dropped the round projectiles into the feeding arm. After lugging a pail of rings with him, he sat in a box booth at the top of the arm and reloaded the mechanism as the ride spun around. Early in the 1950s, Boardwalk maintenance staff mechanized this chore with a homemade contraption in the building’s basement.

Continuing a decade’s long memory-making tradition, excited parents still strap their toddlers to a horse for their first ride and stand by to keep them upright in the saddle. Mom or dad might grab a ring for their young rider to toss. Adults may ride to satisfy a nostalgic yen, but all soon succumb to the delight of successive ring tosses.

Stretching to grab your first ring is a child’s rite-of-passage. Often, several more attempts or a few more inches in height are necessary to succeed. Most kids are happy just to hit the clown’s face with a ring, but many rings fall short and fall to the floor. Once the ride stops, determined youngsters often cluster near the clown target with a fistful of rings for an easier shot, or grab rings within reach on the floor. If lucky riders hit the mouth dead-center, the clown’s eyes flash red and blue, bells ring and sounds clang to salute the achievement. 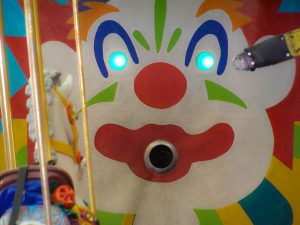 If the outermost horses appear bigger than those on the interior of the ride, they are—a carousel design technique. These days, several outer-style horses can also be found on inside rows, a result of the Boardwalk’s acquisition of Looff horses purchased during the ride’s noteworthy restoration in the late 1970s and early 1980s.

A close and studied look at Looff’s work reveals some unique features of his craftsmanship. Discriminating eyes can distinguish their elaborately carved manes with cut-through holes in many. Super-flared nostrils and muscular legs characterize almost all animals. On closer inspection, you can find protruding veins on their cheeks and faces. Glass eyes and a unique horseshoe design also distinguish Looff’s style. Not exclusive to Looff though, real horsehair tails bring up the rear of each piece.  A brass plate on the left cheek carries the unique number of that horse for Boardwalk records.

Horses on the outer ring are carved more elaborately than their inner stablemates and feature differing regalia. Their saddles vary in size and accouterment – some with faux jewels, others with tassels. Craftsmen armored some horses for battle and some with holstered pistols or a sword sheathed on the side. Bold crestings of varied sizes adorn the breasts of some figures. Strapped to the back of the saddles are flowers, grapes, cherub carvings, bedrolls and blankets, a hunting horn and one with a little lamb. Many guests longingly identify with one favorite, multi-colored horse. 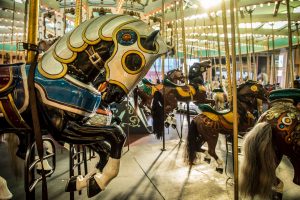 For another characteristic of carousel design, the outer side of every horse bears more adornment than its inner side. The spirited heads of our steeds all tilt outward toward onlookers. Meticulous observation of each section of the ride—except where the chariot and standing horses rest – reveals a line of four horses, except for only three in one section, perhaps leaving room for another someday.

Did you know that carousels in the United States rotate counter-clockwise? Horses are designed and positioned for that direction of travel. But in England and much of Europe whirligigs rotate clockwise, with horse craftsmanship and positioning the opposite of ours.

For many years, the Boardwalk’s ride was without a safety fence. A painted stripe on the floor warned guests to stay clear of the moving platform. Once the carousel stopped and riders dismounted, new riders mounted their desired steed at any point along the ride’s circumference—a much less orderly approach than today’s gated entry procedure. As is still true today, most everyone favored the outer ring of horses as I did, to grab a ring and hit the clown’s mouth. Pity the distracted and unsuspecting rider who landed on one of the two standing horses alongside the chariots. He might awkwardly conceal his embarrassing mistake once the ride sped up to 4 ¼ rpm while his horse did not rise or lower.  I write from experience.

In the 1950s and ’60s, seasoned ride operators mounted the moving platform from within the safety zone with special grace and finesse. Assessing the oncoming machine and eyeing side poles, the operator would tilt backward, and in one motion, grab a pole, brace his raised right foot onto the platform, and swing aboard around that pole in one flawless fluid movement. It was an artful exhibition. OSHA won’t allow that today.

Much fanfare accompanied the ride’s centennial celebration in 2011. The Seaside Company gave the building a facelift in honor of the century mark—new tile on the outside and enhanced Victorian décor on the inside.  A Memory Wall on the building’s eastern wall was established. Since then, over 120 plaques reflect ride memories and Boardwalk traditions for many families and individuals—heartfelt tributes all!  On the building’s southwestern wall, similar plates and several engraved benches honor the names of over forty 25-year and 35-year employees whose decades-long contribution has helped the Boardwalk achieve its coveted industry status as the “Best Seaside Amusement Park in the World.”

A carousel without a band organ is incomplete and second rate. That can’t be said of our Looff Carousel. Leave the Boardwalk crowd outside and step into the carousel building to hear “California Here I Come!” or hundreds more traditional and contemporary tunes. The thunderous and infectious sounds from the signature band organs surround and overwhelm the moment.

Since 2011, three organs have accentuated the ride’s musical charm.  Our ride opened in 1911 with its 1894 Ruth & Sohn 38B Baritone Scale Band Organ filling the air with unmistakable melodies. In 2008, moving figurines and hand-painted historic Boardwalk scenes graced a new facade to stress that organ’s historic significance. Originally positioned inside the ride, that machine now rests at the northwest corner of the building.

The Seaside Company gained a Wurlitzer 165 Duplex Orchestral Organ in 2007 from a collector in the mid-west. He wanted to sell the heirloom to someone who promised to lovingly maintain and properly display it.  Seaside Company President Charles Canfield passed his scrutiny. That organ originally resided at San Francisco’s Playland-at-the-Beach from 1918 until that park’s closure in 1972.  Now it entertains our beachfront visitors from it’s stage inside the eastern side of the building.

Last, the company acquired a smaller Wurlitzer 146-A Military Band Organ in the 1980s as a backup organ, incase it was ever needed. For a few years, putt-putt golfers could hear it playing from the upper reaches of the miniature golf course. In 2011, after being stored for several decades, it underwent refurbishment, received a brightly painted new façade, and joined its larger sister organs at the ride.  This instrument sits in the southwest corner of the building.

All organs play in-turn, one-at-a-time for the enjoyment of Boardwalk visitors. A sound amplification system transmits each organ’s music throughout the entire building. Young and old guests gaze in wonderment at each organ’s intricate components.

Boardwalk maintenance staff rigorously tend the carousel’s machinery. Janitorial staff prep and polish the ride and building ahead of each operating day. The technical team monitors the quality of the band organ operation.

One specialty painter devotes many hours caring for our Looff antiques. His detailed scrutiny ensures that nicks, worn paint, and the wear-and-tear from summer’s exuberant riders are all artfully repaired each winter. Jimmy Raun-Byberg has cared for our steeds for the last 18 years. The Boardwalk’s Centennial DVD includes a unique extra-feature highlighting his passion for our ride.

Hopefully you’ve learned a few things about our famous ride or recalled favorite features of your own. Did it trigger any memories of first rides, family traditions, and fun Boardwalk experiences?  Please let us know by sending us your comments.