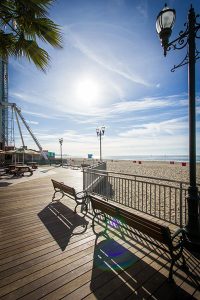 These are faint reminders of the days one could really savor a Boardwalk reprieve by strolling the Pleasure Pier. This structure originated near the west end of the Pirate Ship ride, and over time, jutted out 500 feet over the surf line and over a much narrower beach than exists today.

The decision to build a 150-foot long pier coincided with construction of the first beach Casino in 1904. It was widened at its farthest reach into a T-shaped configuration.

Spring boards, slides and a trapeze were added on one side for athletes and their spectators’ amusement. Iron railings and posts were installed along the pier so electric lights could illuminate it.

The structure was called the “Electric Pier” owing to the public’s fascination with early electric light technology. Benches were added and patrons relaxed and enjoyed a “pier for pleasure.”

A year later the pier was extended to 400 feet, supporting a salt water intake pipe for the Boardwalk’s new swimming pool. In 1946, another 100 feet were added to accommodate larger boat launches. 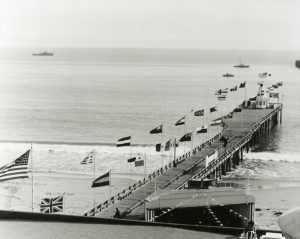 During World War II, in a patriotic show of support for our troops, the flags of all the nations allied against the Axis forces bordered the pier.

I remember the pier in the 1950s and early 1960s. The springboard, slides and trapeze were gone. I didn’t ever dive off the pier, but some daredevils did back then. Did you? Walking seaward plank by plank, Boardwalk sounds became faint background noise, the breaking of the summer surf became predominant. Even that faded as one walked to the last, wider section of the pier.

Guests would gaze over the expanse of beach as bathers frolicked in the surf line. Families and friends took many photographs on the pier with the beach and Boardwalk in the background.

Like many kids, I walked along and balanced atop the 18-inch cast-iron plunge intake pipe. The pipe disappeared three-quarters of the way out as the pier rose up above it and extended further to the Speed Boat ticket booth and a floating dock.

Some people fished off that pier. My brothers and I did. We kept our gear in the rear of our family’s Bright Spot food concession. Once in a while we would try our luck near its far end. Pole, bait, tackle box and bucket at the ready, we could kill several hours, if the fishing was good. Ocean perch and jack smelt were the predominant catch. Successful angling could be judged by the number of curious spectators.

I remember fireworks being propelled skyward from the Pleasure Pier on the Fourth of July. That was back in the day when the beach and Boardwalk became that unique one-day-a-year packed house of celebratory guests. Sadly, fireworks have not been a beachfront feature on July 4th since 1973.

Another fond memory of mine was the fun of being under the pier in the surf line, maybe on an inner tube bobbing between pilings on a soft surf day, or just wading out as far as I dared amid the barnacle-laden pilings. We’d always count the starfish that clung to the pilings when low tide made their presence obvious. Those were the days!

Showing its nearly 60 years of age and weathered and worn over those decades by many storms, the Pleasure Pier suffered one-too-many lost pilings and much structural damage in the rough spring of 1962.

Safety priorities necessitated the pier be closed to the public that summer. It was time for the pier to go, and the plunge, too, for other converging reasons. Both were dismantled the next winter. Plunge pools were filled in and became a miniature golf course. The Speed Boat ride became an attraction of the past, as did the attached bandstand, the scene of many shows and pageants of yesteryear.

A unique, irreplaceable piece of the Boardwalk history came to an end with the Pleasure Pier’s demise. It can be re-lived in the memories of those who traversed this special place. What are your memories of the Pleasure Pier? Do you have any photos or home movies your family took while strolling over its planks? I’d love to see them.