When Fireworks Lit the Sky on the Fourth of July

Beginning in 1916 and enduring over a half-century, the Boardwalk’s Independence Day fireworks show crowned each summer season’s festivities. Huge crowds arrived to observe the holiday’s spectacular aerial display that some called the grandest in the state.

In the last years of those huge beach displays, 400 – 500 pyrotechnic shells produced a spectacle of solid, mixed color, flitter, floral and heavy flash displays.   A 200-ft cascade of fire hung off the Pleasure Pier a time or two. Unique whistling shells that replicated falling leaves and small flowers plus a few comet shells dazzled onlookers.  “Ooooh’s” and “ahhhh’s” signaled their wonderment and approval amid the crackles and explosions of the stunning 30-minute shows.

Through 1962, those holiday fireworks launched from the Boardwalk’s Pleasure Pier but the ravages of one-too-many winter storms led to that structure’s demise the following year.   Undeterred, the Seaside Company moved the launch area to the beach, near the tide line and opposite the Giant Dipper ride.   Thirty to forty different-sized pipes or mortars, buttressed by sand, faced toward the ocean.   Pyrotechnic engineers lit gunpowder charges set on the tube’s bottom to propel the projectiles heavenward where they became fiery, celestial displays.

On a clear night, the aerial bursts reflected on the moonlit bay water, a scene that could not be more picturesque.   Thankfully, many colorful photographs of those long-gone displays live in the Boardwalk Archives.   Although the Boardwalk’s decades-long fireworks tradition ceased after 1974, many visitors still come expecting fireworks on July 4th. “What time do the fireworks start?” is a query on the minds of many holiday guests.

Visitors always arrived very early on America’s birthday back then.   Barbeque and picnic essentials needed to be lugged to their special spot along the San Lorenzo River mouth and Main Beach.  It was a day-long ritual of food, fun, and festivity under the daytime sun followed by colorful explosions in the night sky.

Before the Santa Cruz Yacht Harbor jetties were formed in the mid-1960s, the Boardwalk’s beach was half as wide as today.   Even the Boardwalk’s physical width has expanded a tad from 50-years ago.   In part, that’s why photographs of holiday crowds of that era reveal a parasol-laden packed beach and a Boardwalk chock-full of people.   Estimates of crowd size over those years varied from 30,000 to 50,000 people, not counting those on several hundred small pleasure craft moored off the Boardwalk to gaze from that unique vantage point.

Occasionally, a brass band on the beach bandstand readied the crowd with patriotic melodies until ignition time.   For a few years, ten members of the Paranauts Skydiving Club dazzled beachgoers with afternoon jumps from 10,000-ft above the beach.   Their landward target was a cordoned off space on the sand.   When a skydiver sheepishly missed that mark and hit the drink, beachgoers still cheered their delight.

The arch-nemesis of beach-borne fireworks is fog.   On a half-dozen nights over that half-century, a low cloud ceiling enshrouded the beach area and caused postponement of the show.   Unfortunately, this occurred after disappointed onlookers viewed a few “announcing” airbursts that revealed the folly of expending more.   It was the epitome of a last-minute cancellation. The Boardwalk usually rescheduled the event on the following weekend.  One time, reduced visibility required the show’s cancellation a second time.

The San Jose Mercury News headline declared July 4, 1974, “‘Raunchiest Santa Cruz 4th—No Fireworks, Plenty Trouble”. That summed it up!   That evening, an easterly wind drove a fog bank that offered zero visibility in the display zone.   After hearing the cancellation announcement, the chagrined beach crowd begrudgingly exited the sand.   Thanks to lousy timing, electricity went out in the beach area and Municipal Wharf around 10:00 pm, forcing the Boardwalk to close. It plunged the amusement park into unprecedented darkness for several hours, save for its emergency lighting system.

An unruly and agitated faction in the night’s packed crowd forced a rapid exiting of the Boardwalk.   The pop, pop, pop of firecrackers echoed throughout the beach.   A few safe-and-sane displays continued to light up pockets of sand on the darkened beach.  The worst traffic jam in memory clogged Beach Street and Riverside Avenue from 8:00pm until midnight.   The potential for significant disaster was at its highest.   Thankfully, the worst did not happen.

The wisdom of drawing such huge crowds to the beach on an already favorite holiday challenged the status quo.    The City of Santa Cruz and the Seaside Company jointly agreed to cancel the festive Independence Day displays, making 1974 the last year.

My view of Independence Day in the ’60s and ’70s revolves around my family’s food concessions.   Independence Day required preparations like no other holiday.   By early afternoon, the Boardwalk felt landlocked by traffic well into the night.   If concessions were not resupplied early on July 4th by outside vendors, there was no recovery.   We loaded up our food concessions to the brim to serve hungry and thirsty beachgoers.   That work called for many long hours of preparation during the week ahead.

One fond memory I have of those July 4th experiences is the many special potluck buffets and picnic spreads of sandwich fixings and munchies that employees could enjoy.   There were many more concessionaire families associated with the Boardwalk enterprise in those years.  Names like Giovannazo, Ottaviano, Fitzsimmons, Malquel, Fulmer, Stoner, Meyers, Arnold, Wooldridge and Carpenter only reside in Boardwalk archives now.  Some sponsored these holiday feasts.

On that busiest of busy days, regular employees worked unusually long hours.   Any available family member got drafted too.   To give their staff a unique respite from the day’s intensity, concessionaire families provided unique assortments of food.   It became a Boardwalk tradition, and I got invited to many of these.   Working that afternoon and evening included taking a few “time outs” stopping by different locations to savor and munch on these varied vittles.

As that day wore on into the night, I remember how navigating through the crowd became almost impossible, especially when guests froze in place to gaze at the fabulous half-hour pyrotechnic display.

After the fireworks show, there would be one last rush of business from the exiting beach crowd.   Everyone eventually left the Boardwalk toward parked cars and subsequent full roadways.

After closing, older concession staff worked into the wee hours of the morning, cleaning up and readying their location for opening later the same day.   It was hard work that felt good when it was all done. 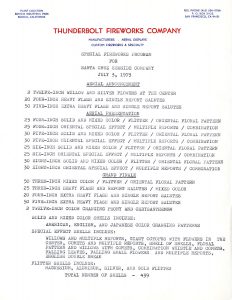 In the past 45-years since those Independence Day events, fireworks have lit up the Boardwalk sky, but never on July 4th.   The City of Santa Cruz has topped its October birthday celebration with fireworks over many years.   The Boardwalk added a June display in recognition of its Centennial in 2007.   However,  these displays fell short of the spectacular Independence Day pyrotechnics that bedazzled crowds back in  days past.

Do you have a special memory of watching July 4th fireworks at the Boardwalk?   What was your favorite vantage point?   Tell me what you recall about that festive day at the Boardwalk way back when.

PrevWho Was Skip?
The Origin of the Free Friday Night Band SeriesNext