Next time you visit the Boardwalk, stop below the west tower of the Sky Glider ride. Facing the bumper cars, picture a giant clown’s mouth. That’s where the portal into our iconic Fun House once stood. For many of us, the Fun House brings back happy memories of long hours of uninhibited play and frolic amid its attractions.

The barn-like, one-story Fun House building dated back to 1893, a decade before the first Casino opened. It served as a pool and billiard parlor then, withstanding the 1906 fire that destroyed that Casino. A roller skating rink was there in 1906. In the late 19-teens a “Human Roulette Wheel” and Nickelodeon occupied some of the space. In the early 1920s, the structure became known as the Rialto Building and served as a dance hall and exhibition space for an occasional dog show and other exhibitions.

The Boardwalk’s Palace of Fun opened in 1925 and was built by noted Fun House developer, J.A. Fields of Milwaukee, WI for $13,000. What made it special was the one-price admission and guests’ ability to pay-and-stay as long as one wanted. Even restrooms were there so one needed not leave the fun arcade when nature called. A roof extension was added above the building’s west end to allow for a 32-ft high slide to be installed. The Ocean Waves walkway, Rotating Barrel, Human Roulette Wheel (spinning disk), distortion mirrors and air jets rounded out the fun-time package.

Roaring Twenties news accounts proclaimed the unique attraction had “all the latest up-to-date devices for making laughter” and that it was a “good tonic for young and old.”

The iconic Clown Mouth entrance did not appear until the early 1940s, when the building’s exterior wood siding was given a stucco finish.

In the late 1950s, I spent many hours in the pleasure palace. The clown’s mouth survived many attempts by excited kids to extract one of the loose wooden teeth. After the cashier was paid the entrance fee (20¢ in 1958 and around 50¢ by 1970), the door opened into the arena!

Along a left wall, a bank of mirrors distorted one’s body shape, prompting shrieks of laughter from the reflected subjects. An operator on a raised control platform at the entrance to the Rotating Barrel gleefully activated blasts of air from the floor that would startle and embarrass mirror-gazers. I used to plant my foot on an air hole to see if I could withstand the next blast. A set of those historic fun house mirrors can be found at the Boardwalk today in a nook inside Neptune’s Kingdom.

Inside and to the right of the entrance, a 50 foot undulating walkway (50 feet long by 2 feet wide) called Ocean Waves created a rocking up-and-down challenge. Gripping the handrails to stay balanced along the rolling walkway sections, I’d take three or four steps forward and a step or two backward until finishing its course. A gawker or two with hands shading their eyes would usually be peering into the arena through the outside windows near the waves to glimpse the excitement.

I headed for the slide next. A gunny sack was essential to keep the buttons of my pants from being scraped off. An operator sat near the sacks, insuring that everyone got one. After hightailing it up the stairs, to the top of a three-story landing, I could peer over the roofs of Boardwalk buildings through a chicken-wire covered window.

A cool breeze smelling of popcorn would calm my excitement. On busy days, an operator would be stationed at the top of the slide to organize eager sliders and their sacks onto one of the four polished maple lanes. On slower days, the operator at the base of the slide was able to control activity with a microphone and connected loudspeaker. During the slow times I could enjoy as many repetitions on the 125-ft humped slide as I had energy left for another climb to the top.

My next choice was usually the Spinning Disk – or Human Roulette Wheel – as it was sometimes called. The secret of staying on the rotating (30-foot in diameter) maple platform was to sit dead center – and I was not the only participant who knew that. It was always a scramble to achieve that coveted spot. Once there, us veteran enthusiasts might work to lift the hands of others nearby as they braced against the rotating wheel’s centrifugal pull. If I didn’t make the center, I would surely slide off into canvas covered padding, closely entwined with another fun-loving participant. The days of this wild style of amusement park fun are long gone. 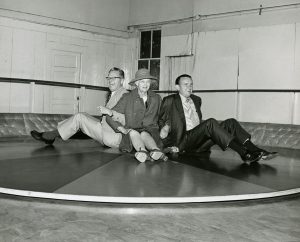 Then on to the rotating barrel. The entrance sign said “Take Off Your Glasses!” but I always wondered where I might safely put them. Into the revolving 8-ft wide barrel one would try to go straight through the 32-ft long tube. With just a little practice, it really was easy when no one was ahead of me. But when tumbling, off-balance novices were rolling about, the obstacle course proved more challenging. I could plant my tennis shoes on the moving barrel and be carried up its side until gravity necessitated jumping back to the bottom or I’d become one of the tumbling tourists. This is another form of fun left to the annals of amusement park lore.

After as many repetitions on all the attractions I could bear, tired and worn out, I’d leave the Fun House knowing I’d soon return for another time.

As I got older, the attraction beckoned me less as it really catered to the pre-teen crowd. I don’t recall spending much time there in the 1960s. In those years though, I would occasionally serve coffee or a milkshake to Fun House operators who were taking their breaks at my family’s Bright Spot concession. Especially on busy days, it was a brief decompression time for them after shepherding screaming kids for a few hours. I always thought it took a unique breed of operator to survive in that place.

After 77 years, the building was simply worn out. It sat on pilings that had never been replaced. Fun House attendance was waning as teenagers became more sophisticated in their fun-seeking choices. In November 1971, demolition began at the Boardwalk’s “baby-sitting headquarters.” No longer could savvy parents enjoy a quiet meal or cocktail at an establishment along Beach Street while their kids frolicked for hours in the Fun House. Today’s two-story building (actually three stories if you count the basement), houses the Speed Bumps and Undertow Rides, as well as the Pizza Now, Beach Tacos & Nachos, Beer Cove and Surf City Grill eateries.

Got any Fun House memories you care to share?Fun House

PrevThe Legacy of the Wild Mouse Lives On!
A Deep Dive into the PlungeNext