The Nostalgic Allure of the Giant Dipper 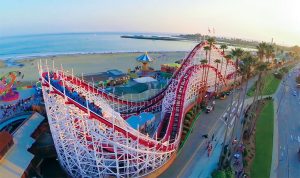 In a previous blog, I described how the Boardwalk’s Giant Dipper roller coaster came on the beachfront scene in 1924. This time I am recalling the remarkable role the ride has played since birthing lasting memories for its 66 million lifetime riders.

Our wooden roller coaster is a connoisseur’s delight! In his 1998 anthology entitled “Roller Coaster – Wooden and Steel Coasters, Twisters and Corkscrews” author David Bennett quotes Tom Maglione, “This ride is not the tallest, fastest, or the longest, but it combines so many elements of great coasters that overall it surpasses every other ride for me. It’s a classic, combining drops and peaks with good side turns and a superior turnaround over the station. Foremost among its qualities are its wooden construction and seaside location. The sight of the Giant Dipper assaults your senses as does the shoreline of Monterey Bay, and the smell of popcorn, corn dogs, burgers, and salt spray….” And more can be said!

The Giant Dipper was born in the golden age of roller coasters in the U.S. In recognition, the National Park Service honored the Giant Dipper’s stature by designating it a National Historic Monument in 1987. The American Coaster Enthusiast (ACE) organization has feted our coaster several times. In 1994, that group presented the ride with a Golden Age Coaster Award. In 2007, the year of the Boardwalk’s Centennial Celebration, they honored the ride again with an ACE Coaster Landmark Award, a designation reserved for rides of historic significance. They saluted its unusual curved station, its thrilling serpentine tunnel, and innovative track design.

Arriving at Santa Cruz via Highway 17 and driving beachward down Ocean Street, visitors get their first glimpse of the Dipper’s outline on the horizon. If San Francisco is known by its Golden Gate Bridge, Santa Cruz is recognized by the red-and-white silhouette of the Giant Dipper. For approaching visitors, the impressive sight of the Dipper heightens expectations for another memorable day in Santa Cruz.

Dr. Robert Cartmell, the author of the “The Incredible Scream Machines – the History of Roller Coasters,” described our ride in 1994, “It’s like architecture, it stands by itself whether you ride it or not…. It’s one of those coasters that won’t let up … This is a great total ride.”

That’s the allure of our Giant Dipper. It’s been a Boardwalk backdrop, a memorable thrill and family tradition for countless guests. Many seniors fondly recall their first exhilarating rite-of-passage encounter with the Dipper. Now they lovingly accompany a grandchild for that same suspenseful fulfillment of another generation’s youthful destiny. Ollie Tyra became a teenager in 1924 and watched the ride being built. She was one of the first teens to ride when it opened. During the Giant Dipper’s 70th Anniversary Reception on May 1994, the Dipper’s temptation unexpectedly drew her aboard once more, against her caregiver’s best judgment. When 87-years young, Ollie rode again during the ride’s 75th Anniversary Reception. This time she had her cardiologist’s permission. Like Ollie, many parents and grandparents began their generational family custom on that same ride.

“Can You Survive 75?” 1,400 people thought they could endure 75 consecutive rides without getting off as part of the Giant Dipper’s 75th Anniversary festivities in 1999. 20 finalists were selected. 13 actually finished the 4-hour endurance rush. Pat Byron of San Francisco and Eric Scott of Gilroy shared in the grand prize by lottery – a round trip excursion and a two-night stay at Coney Island’s historic Astroland, home of the famous Cyclone Coaster. Our Giant Dipper stood in for that east-coast icon during the filming of the movie “Sting II.”

Memories of first blood-rushing rides abound. Generations of parents have coaxed their kids toward that fateful initial ride, grandparents their grandkids and boyfriends their girlfriends. My trepidation from viewing that first terrifying dip scared me off the Dipper until my dad persuaded me aboard when I was around 8-years old in the mid-1950s. I think it only took that one ride with him to build my resolve to ride again – and again. Twenty years later, I rode it with my soon-to-be-wife for a shared courtship thrill.

After nervously jockeying for seats and settling into the train, first-timers are abruptly startled when the station brake drops, allowing a newly loaded train to slowly move out. Then it suddenly and rapidly descends into the disorienting tunnel. Once the lift appears, and the train gradually elevates, rider trepidation raises too as the apex draws nearer and nearer. Cresting that hill, a wind-in-the-face adrenaline rush overcomes riders. Many long to repeat their experience year-after-year. So dramatic is that moment, that newlywed Katy and Orin Hahn shared a special memory for the ride’s 95th Birthday Celebration Contest. During their Cocoanut Grove wedding reception, they spontaneously headed to the Dipper with their wedding party to add that momentous thrill to the day. Their photographer snapped the image all their friends still talk about.

All this speaks to the endearing legacy of our nine-decades-old Giant Dipper. On or off the ride, the clickity-clack, clickity-clack of the train is a familiar Boardwalk sound as the coaster slowly progresses the lift hill. Riders’ screeches prevail once the train plummets down that first drop as gravity takes over, and it all happens within earshot of strolling Boardwalk fun seekers. The train careens through smooth curves and beautiful time-worn banks until it slows to a halt at the station two minutes later. Train speed tops out around 46-mph during the half-mile loop.

The Giant Dipper is the Boardwalk’s crown jewel. It speeds riders along the Boardwalk where the sights and sounds and smell of Pacific salt air bolster the ambiance of this breath-taking experience. Whether nestled in the front seats for a push over the drops or whipped around in the wildest rear seats, our ride delivers memorable thrills – as it has for 95 years.

Maintenance of the ride’s structure, track and trains have been a high priority. The structure has been painted several times over the years. As far back as the 1970s, the track was green. Periodic upgrades have occurred over the decades on the ride’s station and systems. Today’s Victorian station façade dates to the mid-1970s. It’s the fifth iteration of station design.  The two trains, holding 24 passengers each, have been modernized over time. The latest version from 1984 sports a woodies design to replicate the look of the original trains. This version has bucket seats and a tight lap bar that ensures everyone’s ride is safe and secure. The station brake system has morphed from being entirely hand-operated to have air cylinder actuation today as part of a safety block system.

Time is quickly marching toward the Giant Dipper’s centennial in 2024. You can be assured the Boardwalk’s coaster maintenance team will have it ready for that celebration. The Boardwalk Bowl’s Coasters Lounge sports a terrific tribute to our beloved ride and its history at its Cliff Street entryway. You can find more facts about our iconic coaster HERE.  You can relive a virtual ride on the Giant Dipper HERE. Take a whirl in the comfort of your home and relive the thrill of Santa Cruz’s bayside landmark.

Is there a special memory of a trip around our Giant Dipper you would care to share?  Let us know!