Home › Never A Dull Moment › Who Was Skip?

In previous blogs, I have casually alluded to Boardwalk historian emeritus Skip Littlefield.  Not long ago, a new Seaside Company staff member asked me a good question. “Who was Skip?”

It dawned on me that many might have the same question.  I want to offer a tribute to this legendary Boardwalk figure in this blog.

Our paths occasionally crossed in the late 1960s and 1970s  nearing the sunset of Skip’s Boardwalk years.  I sometimes served him coffee at the Bright Spot concession before he took center-stage for a summer weeknight show on the beach bandstand.   He’d regale me with anecdotes and yarns about Boardwalk days gone by.  Skip was a talker.   A chance encounter with him always took longer than expected.

Skip was born Warren Wendell Littlefield in 1906.  He was 3-months old when his dad operated a furniture business in Santa Cruz.  That enterprise took the Littlefield family to Stockton, CA in 1912 where young Warren attended grammar and high school and earned the moniker “Skip” because he rather consistently cut gym class.

The family must have summered in Santa Cruz since Skip recounted earning 50¢ a day as an 11-year old kid fetching wooden donuts tossed at numbered clothespins in a Boardwalk Pitch Game.   The next summer he collected tickets on Sunday as a deck-hand for the tourist excursion boat at the end of the Boardwalk Pleasure Pier – also for 50¢ an afternoon.

The Boardwalk’s heated saltwater Natatorium, ordinarily known as The Plunge, enjoyed robust popularity when it opened in 1907.  At that time, practically no one could swim.   Boardwalk entrepreneur Fred Swanton arranged for the innovator of the Australian crawl swimming stroke to display his technique.  It drew a very young Skip Littlefield to learn to swim in the Plunge.  Skip called Fred Swanton a mentor who influenced his thinking and way of life a lot.

Water became Skip’s second home. He turned into a Pacific Coast swimming champion while attending Stanford University.  At 21-years of age, he held the world’s 440-yard breaststroke title.  Other swimming titles came his way during his early 20s.

Continually beckoned by the beach and surf, he became a Seaside Company lifeguard in 1927 and organized several  swim meets in the Plunge that year.  In the succeeding summer his 7-day a week, 13-hours-a-day lifeguard duties were expanded in a fashion that thrust him toward a new career.  Following his daily lifeguard chores, late at night he began writing advertising copy and seashore news articles for the Boardwalk’s event director.  Not long after that, he was made the manager of the Plunge.  His promotion and advertising acumen became synchronized.

Four years later, the depression years established him as the lone employee in the department of publicity, advertising, promotion, and entertainment. Yet the water always summoned him.  He  directed the Santa Cruz Municipal Life Saving Corp for 29 more years.  He instructed local swimmers in the technique of competition in the Plunge.  He was a Red Cross Life Saving Examiner for practically three decades. During WW2, the War Department appointed him as the emergency Director of Aquatics for the 963rd amphibious brigade at Fort Ord. 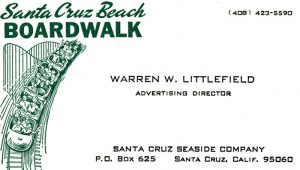 In 1935, he became Advertising Director for the Boardwalk, a position he held until his retirement.  He functioned as a one-man ad agency for 40 years, producing artwork and layouts while writing copy and arranging media placement.  In concert with the Southern Pacific railway, he promoted the seasonal Sun Tan Special weekend train that brought over 1000+ visitors a day to the beach from as far away as San Francisco.

Skip had panache.  He was a character in the best sense of the word. He tirelessly and unpredictably planned spectacles and stunts for public enjoyment.  He was most at home when center-stage as master of ceremonies, introducing one event or another, from the Miss California Pageant in the 1950s to Moore’s Mess of Mutts in the 1960s to July 4th Fireworks Spectaculars that spanned the decades until 1974.   He once said after you hit on a promotional idea, you have to tell people why they are going to like it!  Skip could certainly do that – and his propensity for hyperbole often stretched the facts a degree or two.

His Water Carnivals became a regular seasonal feature in the Plunge, and he produced 317 of these spectacles from 1928 to 1946. These shows included swimming, diving, comic relief, aerial exhibitions, and musical accompaniment. Skip  choreographed it all and served as MC by proudly announcing each upcoming act from a makeshift stage, centered at pool level.  With a bullhorn in one hand and shooting blank ammo from a pistol in the other to grab attention to himself, he would rock on his feet, gesturing his right arm and index finger in the direction of the next aerial daring act. The crowd loved the drama of it all.  He supported these shows with advertising campaigns that drew thousands of spectators to the beach every summer.

The Slide for Life inside the Plunge became an outside sensation, too. A 750-foot cable linked the top of the Casino dome and the end of the Pleasure Pier.   Hanging from a trolley carriage, Don Patterson held onto a dangling partner as both slid down the cable, with no safety net, to drop into cold bay water just before striking the pier.   Skip conceived of the incredible event and also convinced Patterson to perform at night, while wrapped in gasoline-soaked burlap… and set on fire!  Did I mention that Skip was very persuasive?

Skip was an honorary lifetime member of the Musicians Union.  He loved the grandeur of  band music.  He publicized the Cocoanut Grove’s Big Band era in the 1940s and 1950s and managed that unique space for 21-years until 1976, taking it through the period of 1960s teen and 1970s disco dances.  He loved to add a showman’s twist  to a concert when he could. After the Watsonville Band stirred Memorial Day crowds from the beach bandstand one year, he placed its members on the Sky Glider ride – instruments and all!  The Big Band of Harry Owens and his Royal Hawaiians played in the Cocoanut Grove and then in the Plunge, too.  One news story mentioned that he amassed the finest symphonic band music library on the Pacific Coast.  In 1965, when he donated it to our local Musicians Union, the collection was appraised at $75,000.

Skip loved the craft of wordsmithing and could spin a phrase with the best of them. He became a feature writer for our local newspaper and for Look and Motorland magazines. I have enjoyed reading through his multi-page collection of descriptive phrases. As an example, when his beloved Plunge closed, he described it in the Santa Cruz Historical Society News and Notes in June 1963, “Out of the grandeur of the mauve decade a robust rococo relic silently slipped into the ebbing stream of pioneer promotions at the Santa Cruz shoreline last month.  Closed forever was the huge indoor warm salt water Plunge – a Santa Cruz recreational landmark for 57 years.” Only Skip could describe it that way.

His lifetime civic engagements are too  numerous to recount here.  His promotion acumen did not focus just on Santa Cruz Beach.  He directed publicity for 70 community fundraising drives for city and county organizations.  Active in the County’s Advertising Committee for many years, he served as its chairman from 1951 to 1967.  In 1956, he skillfully engineered Santa Cruz County displays at the prestigious Los Angeles County Fair by having fresh fruit and flowers flown in daily and won 11-blue ribbons. In October 1942, the editor of the Santa Cruz Sentinel headlined an article heralding Skip’s efforts during that first year of WW2, “Santa Cruz Kept on Map of Vacation World by Littlefield Efforts.”  It described how Skip had swamped California newspapers with pictures and stories about Santa Cruz that year.

Skip had a penchant for history, an attribute which I believe he enhanced in college.   He became the unofficial historian of early Boardwalk years, a pursuit of love, not duty.   With meticulous attention to detail, he collected, cataloged and filed memories, facts, and anecdotes of beachfront activities and events. Those files became the source of the Seaside Company’s archives.

Even in the last years of his engagement at the Boardwalk, I observed him arriving at his office with galley books of early Santa Cruz Sentinel newspaper editions.While chain-smoking his beloved Camel cigarettes, he would pore over those pages of history and personally photocopy relevant articles.  Reliant on his Royal manual typewriter, he’d record the source, date, and keywords on the document and then file the factoid in its aptly named folder and cabinet.  This he did over and over again.

A sad event occurred in 1963 when Skip was away on  vacation.  During the alteration of the closed Plunge into a miniature golf course, zealous staff casually gathered, discarded and burned as junk some collection boxes of his memorabilia that were stored in that building.  Skip was heartbroken and swore off his historical work – for a time. Thankfully, he returned to that endeavor.

Camel cigarettes became his trademark.  He could engage in gravelly-voiced spirited conversation and roll that lit mini-torch from one side of his mouth to the other at the same time. Sadly, those cigarettes led to his demise.  But even while undergoing chemotherapy for cancer, Skip continued to  pursue his Boardwalk historical interest, foregoing the time he had planned to spend in his trailer on the Klamath River.

He continued to work on a book that was never published.   We are endowed with several chapters, though, that  relate a rich and early history of the beach area and the Boardwalk enterprise.

In September 1976, over 350 people feted Skip at his formal retirement affair. They celebrated his storied career in his beloved Cocoanut Grove.  That night, Skip began his personal remarks, “Tonight, I find my eyes gleaming through the moisture of memories!” 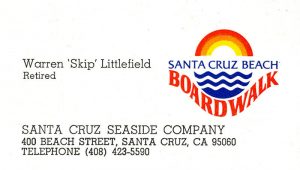 The sunset of his time at the Boardwalk is summed up by his own closing remarks at that banquet, “And with the setting of a shoreline sun – we still hear that plaintive refrain from the Stagnaro loudspeakers at the end of the Pleasure Pier, calling the Boardwalk’s Henry ‘Hot Dog Miller – ‘Mr. Miller – time to go home – Labor Day is done – the Suntan Train awaits on track No 1.’”

Carrying on his legacy, the Boardwalk today has an excellent complement of marketing, promotions, and social media professionals to satisfy the tastes of today’s guests.  However, I think I can say we won’t ever see the likes of a Skip Littlefield in that arena again.