A Walk Along the 1973 Boardwalk

Home › Never A Dull Moment › A Walk Along the 1973 Boardwalk

Picture yourself entering the Boardwalk from Beach Street at Entrance #5 (it passes under the Giant Dipper.) Go to your left past Hot Dog on a Stick, and stop at the “Bay Brews” concession. Enjoy a local craft beer and linger over the dramatic scene behind the bar, which fancifully pictures the Boardwalk as it was in 1973.

Commissioned by Whiting’s Foods, the large painting highlights many of the Whiting family’s food concessions of that era. Boardwalk artist John McCullough brought his idea to me and my brother Ron way back when. We thought it a great addition to a large dining area in a family eatery. John created the landscape from photographs of the Boardwalk he took from the shoreline. The painting remained on that dining room wall until changes to that space resulted in today’s more prominent placement. Today, older guests linger over a local brew as they fondly recall beachfront memories they formed nearly a half-century ago. 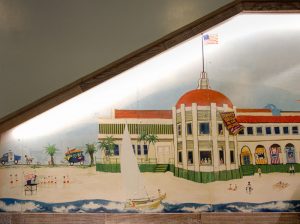 Let me describe what’s displayed in the 1973 painting, the accompanying images will help. Beginning on the left or west end of the mural, you can’t miss the city’s Junior Lifeguard program, a favorite youth beach activity underway since 1964 that endures to this day. A little further to the right, a banner on the Cocoanut Grove building heralds Jax Marionettes who entertained families in the Fun Center back then. (That’s when we called it the Penny Arcade.) Ashdown’s Seaside Inn restaurant occupies the lower Bay View rotunda, there’s been an eatery there for many decades. Marini’s Cigar and News Stand juts out next to the Arcade sign. It once adjoined Marini’s Cotton Candy and Salt Water Taffy concessions, they were staples in that spot since 1915. 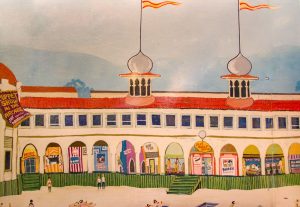 Next, the “Mens” sign directed patrons to restrooms along the Boardwalk’s former Entrance #1, where the street-side steel stairs ascended to the Cocoanut Grove. The Grove’s Sunroom has sat atop this entryway since 1981.

Marini’s clothing stores, the purple Sandal Shop and Hide Tide, appear next and then comes a small arcade. At the entrance to the Miniature Golf Course is Whiting’s Ice Cream Store #1, featuring favorite chocolate-dipped bananas, sandaes, and frosty cones. By 1973, our putt-putt golf had supplanted the former saltwater swimming plunge for a decade. The Skeeroll and Twenty-One games appear next, and a Balloon Dart concession completes a trio of skill games, wrapping up this panel. 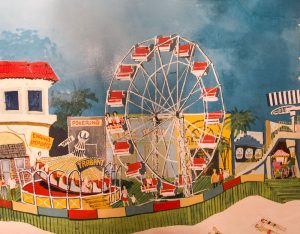 Chachie’s Hot Dogs is the brick-front location at the left of the mural’s large center section. By 1973, this corner diner had satiated visitors with its tasty wares for 50-years. The sign at Casino Imports points out that this gift store sat along Boardwalk Entrance #2. Next, the mural prominently depicts the Trabant Ride and Ferris Wheel. Two years previously, the Trabant appeared in a scene of the motion picture “Harold and Maude.” You may note that Ferris Wheel riders didn’t face the beach back then and in fact, never did.

Both rides sat beach-side of Pokerino, more Skeeroll games, and the Sportland Arcade. Three Clown Toss game targets stare out from their location. A bigger-than-life popcorn wagon appears. It was Whiting’s Foods first vending cart on the ‘walk. It’s parked in front of a Shooting Gallery. Remember when a quarter entitled sharpshooters 5-shots of real .22 caliber ammunition? Ducks targets moved along the pond on their motorized track while stationary back-wall targets tested player’s skill. 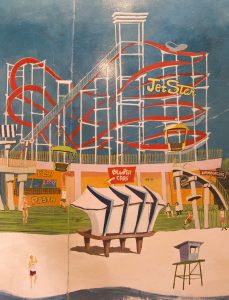 The orange Whiting’s Pizza Shop opened in 1972. The restaurant’s dining area peered into the adjacent Bumper Car ride. Hodgie’s at the Boardwalk sits at the east end of that building, carrying on a hamburger tradition begun at this location in 1934. The Fun House had been gone from this space for two years. The Jet Star ride sits atop, it became the Boardwalk’s third coaster in 1972. The mural displays the west terminal of the Sky Ride, and the cement bandstand, a fixture on the beach from 1963 until its destruction in the 1989 Loma Prieta earthquake. Sky Glider gondolas are strung along the Boardwalk making their trek to its eastern terminus. 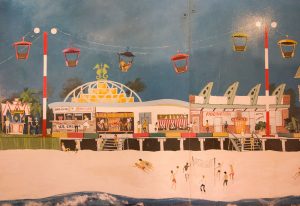 Moving on to the right, one sees the circular Merry-Go-Round ticket booth at Entrance #3. Remember when it was a hat stand in the 1960s? It served for ticketing purposes until 2017. Next to it is Whiting’s Carousel Cone Shop where we sold chocolate-dipped frosty cones, popcorn and snow cones. The historic 1911 Looff Carousel is prominent in its geodesic-domed building that was constructed in 1966. The Baseball Game has been a Boardwalk skill game since 1922. Many visitors will recall the Fascination Game with its addictive 32 bingo-style tables. Fulmer’s Gift Shop comes next and borders Entrance #4, visitors could discover a souvenir for every fancy. There goes a garbage truck dashing out Boardwalk Entrance #4. 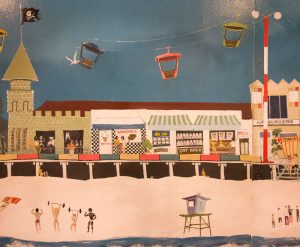 The Haunted Castle ride is next. By 1973, a four-decade-long evolving dark ride experience occupied the space, which originally was a 4-lane bowling alley. The black-and-white tiled Whiting’s Freeze Stand then appears. It served orange “tropical freeze” sherbet and long-standing Boardwalk favorites, chocolate-dipped bananas and sandaes. Guests licked their ice cream while watching players at the Goldfish Game, adjoining the Cat Rack and Basketball Games. The two-story building is Eder’s Restaurant. When it opened in 1964, visitors could enjoy breakfast, lunch and steak dinners in its upstairs dining room with an exceptional view of the beach. Today, that upper space is a break room for employees. 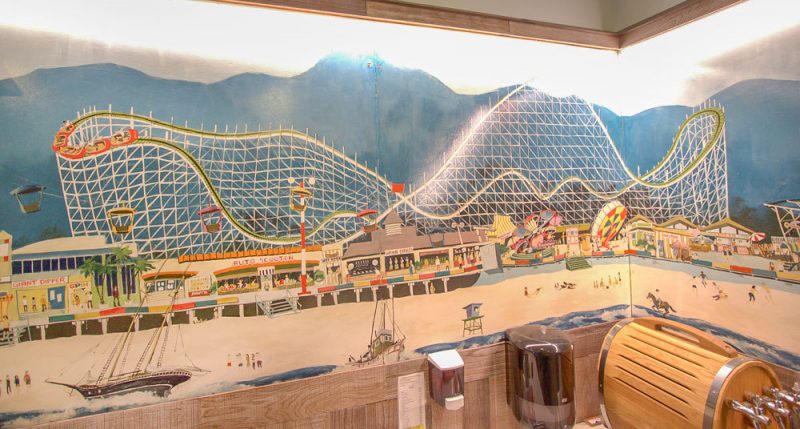 The exterior of the Giant Dipper station’s reflects a 1960s remodel of that building. The coaster’s structure dominates the painting, the track was green back then! The Dipper station sits above Spin Art where guests fashioned their own personalized artworks by dripping multi-colored paint on spinning canvasses. Employees’ aprons became works of art, too! Weaver’s Popcorn Concession was also tucked in below the station, their snow cones made with real shaved-ice were a guest favorite. That stand adjoins another Balloon Dart game. Then comes the Auto Scooter ride, versions of which had operated at this location since the 1920s. That’s Ray’s Hot Dog stand on the ride’s east side where, since the 1950s, delicious frankfurters stirred guest appetites from the counter-mounted roll-a-grill. 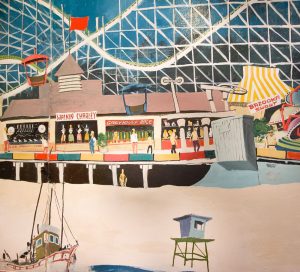 Shooting Gallery #2 comes next, another live-ammo target shooting experience that’s long gone. Next up is Walking Charlie. Players threw baseballs to knock off the metal hat each mannequin wore while traveling along the motorized track. Do you recall the Greyhound Races skill game? The greyhounds raced to the finish line as players maneuvered their ball. The soundtrack could be heard shouting “Where’s my doggie? Where’s my doggie?” Then came another game where guests tested their skill playing Hoop-La. Get the hoop over the wood block, and the prize behind it is yours! The east Sky Glider station stands prominently on the beach-side of the Boardwalk. A sign hints that the Bazooka Game is around the corner below its bright yellow and white roof panels. The Dime Toss game at the corner can’t be seen. 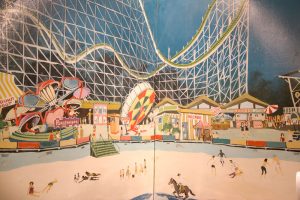 You can clearly spot the Paratrooper Ride. It hides Miller’s Candlelight Gift Shop, though. The Round Up Ride conceals the Lucas Boardwalk Bugle Newspaper Headline concession and Marini’s Beach Sundries and Souvenir stand. However, Whiting’s Cone Shop is clearly visible. All these concessions recessed into the structure of the GiantDipper’s lift hill.

The right wall mural reveals the green Marini’s Munchies concession in the foreground. Funland Arcade sits next to it. There’s Leo the Lion, a real favorite with the kids as his soundtrack beckoned them to feed him with trash. These buildings cut off the view of Fitzsimmons’s Hot Dog on a Stick concession and Hutton/Handley’s Boardwalk Fries, both of which sat against the Dipper structure. Tacos Aqui was the forerunner of Whiting’s Taco, Hamburger and Hot Dog stand. Look to the left of the Taco sign and you can make out this mural resting in its original dining room location. 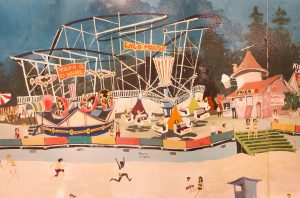 The classic Tilt-A-Whirl and Scrambler rides sit beach-side of the Wild Mouse. The “Tilt” is still with us, we call it Riptide today. The Scrambler resides in our memories and we bade farewell to “the Mouse” in 1975. Now there is a ride you remember, if you ever rode it! To the right is Whiting Food’s Bright Spot building with its iconic tower facade. Guests enjoyed cotton candy, snow cones and soft drinks from its circular front counter and hamburgers, hot dogs, fries, and shakes at its side counter. This is where Walt Disney got his hamburger lunch during his 1963 visit to the Boardwalk. 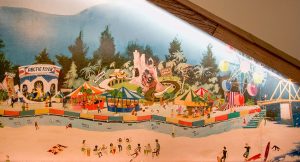 A Kiddie Land sign sits atop its fairy-tale style ticket booth. We can pick out boat, car, merry-go-round, and mini train rides for little tots. The Arctic Flyer and Rock-O-Plane rides thrilled the young at heart The Rock-O-Plane continues to excite guests today. Dominating the river end of the mural is the long-gone Autorama motorized car ride. Parents could give their young, future drivers an early turn at the wheel of a gasoline-powered sports car. The Cave Train appears, returning from another exploration through the Lost World. A newer version of this ride still chugs today through an underground region of fun-loving cave people.

The beach is sparsley populated, but the mural brings back memories of fun times on the warm sand as Boardwalk sounds became the backgorund din. Surfers at the river mouth seek the perfect wave. This is the very spot where, in 1885, three Hawaiian princes brought the tropical sport of surfing to California, and likely to the entire North and South American continents. 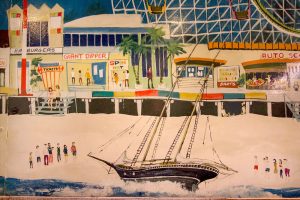 In the middle of the painting’s large center panel and aground in the shoreline opposite the Giant Dipper entrance is the stranded 125-ft schooner Shamrock VI. That ship came ashore during a sudden wind surge in early October 1972. Read more about this in a blog post I wrote back in 2018.

One feature of the mural that is not readily detected are depictions of a few iconic people who oversaw the Boardwalk during this time. Look closely! Is there someone you might recall from back in that day?

Exploring the mural provides a great snapshot of the Boardwalk as it was nearly a half-century ago. A host of park improvements has occurred over the years, but much has not changed. Management has always focused on making our iconic park better and better while not straying far from its nostalgic roots. This is one reason why industry insiders have repeatedly voted the Santa Cruz Beach Boardwalk “Best Seaside Amusement Park in the World!”

If you haven’t noticed this mural, make it a sight to see during your next visit to the Boardwalk. Are there special memories from the early 1970s you care to share with us?

PrevThe Clam & I
The Dawn of the Cave TrainNext